S-X Open Oceania champion reacts to race one incident with the home-favourite. 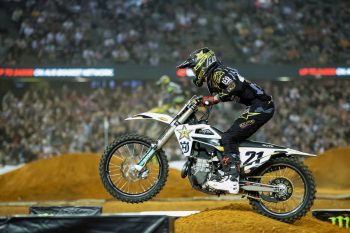 Jason Anderson has downplayed his clash with Chad Reed (Penrite Racing Mountain Motorsports Honda) in the opening main event of the 2019 Monster Energy AUS-X Open Melbourne, although he admitted a younger version of himself would’ve been fired up over the incident.

Early leader Anderson was taken down by home-favourite Reed during lap two of main event one, which saw the 35,000-strong inside Marvel Stadium erupt as the number 22 led the field in what was his final appearance in Australia as a full-time professional rider.

The former AMA Supercross champion rebounded from the incident to finish seventh before scoring a pair of race wins in the final two outings for second overall, granting him the 2019 Monster Energy S-X Open International FIM Oceania Supercross Championship.

“We’ve had our fair share,” Anderson lightheartedly stated at the post-race press conference. “But at the end of the day, I don’t really get too fired up. I’m sure younger me would’ve been fired up – we all get the bad end of the stick sometimes, and sometimes we’re on the other side of it.

“Like Chad [Reed] says, Ricky [Carmichael] retired at 26 and there’s a lot you learn – I’m 26 right now and I feel a lot has changed for me over the past year.

“Going from winning a championship and having injuries and stuff like that, I feel like for me – win or lose – getting a tyre tap like that, I just enjoy racing and I think that’s the part that has changed for me over the year.

“No matter what – win or lose – I’m just going to keep trying my butt off and enjoying it. Maybe if it was a couple of years ago I would’ve been fired up, but right now, I’m just enjoying it and having a good time.”

The Rockstar Energy Husqvarna Factory Racing rider has already returned to America to continue his preparations for the 2020 Monster Energy AMA Supercross Championship.