Retirement looms as Australian icon gets set for emotional send-off at home. 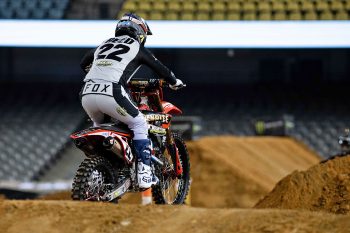 An emotion-charged Chad Reed will make his Australian farewell as a full-time professional on home soil in tonight’s Monster Energy AUS-X Open Melbourne.

The 37-year-old formally confirmed in Friday’s pre-race press conference that the 2020 Monster Energy AMA Supercross season will be his last, marking the end of a spectacular 20-year career.

With AUS-X Open taking centre stage at Marvel Stadium in what is being regarded as the biggest and most important race in Australian supercross history, it is a fitting opportunity for Reed to race at home as a professional one last time prior to hanging up his helmet next year.

Despite sitting out the Monster Energy S-X Open Auckland two weeks ago with a rib injury sustained in Paris, Reed has healed further since and is confident he will be fit to line up this evening. A special send-off will take place during the night show.

“I feel like if I really, really had to race in Auckland I could have and would have been far less than my 100 per cent, but this one for me is the main one and it was more important to have a shot at it tomorrow night,” Reed explained.

“Pretty much, what you see is what you get at this point [for 2020]. Mountain Motorsports has been amazing in helping and supporting everything that I’ve been doing – the goal is to go racing and I’m pretty confident that we’ll make that work. Sponsors, how we look and feel is all a moving target, but I’m excited.

“2020 will be my final season, so it’s a big one and I’m excited. I need to race this weekend for that reason… to do it this long and see where the sport’s been, to be at this stadium, I’m just excited for everyone involved.

“I think this will be my final race in Australia as a full-time racer, but my goal is to do off-season races – I really enjoy those. I’d love to keep my roots strong and come back, which you want to race, but maybe a year from now I don’t know if I’ll want to put the work in to do it, so maybe I’ll just come and race Ricky like BT does.”

Reed is currently working on a deal that could see him contest the entire American championship one final time, however, at the very least he’s expected to be behind the gates at Anaheim 1 on 4 January for his historic 250th milestone.

Once the longtime international does hang up his helmet, current S-X Open FIM Oceania champion Reed is almost certain to become an event ambassador in a similar role to the likes of Ricky Carmichael and Ben Townley.