It was an eventful start to race one as Jason Anderson (Rockstar Energy Husqvarna Factory Racing) secured the hole-shot, as it was red-plate holder Luke Clout (CDR Yamaha Monster Energy) who went down on lap one.

Chad Reed (Penrite Racing Mountain Motorsports Honda) made an aggressive pass on Anderson for the lead on lap one, the American going down – Clout also got caught up in the ongoing carnage, and took the Repco Shortcut lane as a result. It wasn’t to be though, as he went down a third time just a matter of laps later.

Anderson went down again while making a pass just before the finish line, as Justin Brayton (Penrite Honda Racing) maintained second for much of the outing, ultimately passing Reed to clinch victory.

Anderson rocketed to the hole-shot in main event two with Clout in tow – the New South Welshman momentarily earning the lead prior to clicking over lap two.

He was passed back by Anderson, while Brayton used his opportunity with the shortcut lane to overcome both of them, earning and maintaining the top spot for much of the outing.

Anderson passed him with two laps to go, securing victory as Clout earned third. Hill was fourth ahead of teammate Reardon, while the top 10 was completed by Metcalfe, Reed, Jackson Richardson (Honda), Evans and Jesse Madden (Honda).

The start to main event three was chaotic as Anderson couldn’t brake in time for the opening turns, causing the entire field to be held up. Clout crashed in the chaos, further damaging his title hopes.

Anderson rode flawlessly in what was mainly an uneventful outing – minus the start – while Hill put in an incredible ride to advance to second ahead of Brayton at the chequered flag.

Metcalfe was fourth over Reed, while positions six to 10 were taken out by Reardon, Clout, Evans, Todd Waters (Husqvarna), and Long.

Overall, Brayton was victorious over Anderson and Hill, who earned his first podium across three appearances in Australia. Brayton was crowned champion over Clout and Reardon, while it was Anderson who lifted the S-X Open International FIM Oceania Supercross Championship. 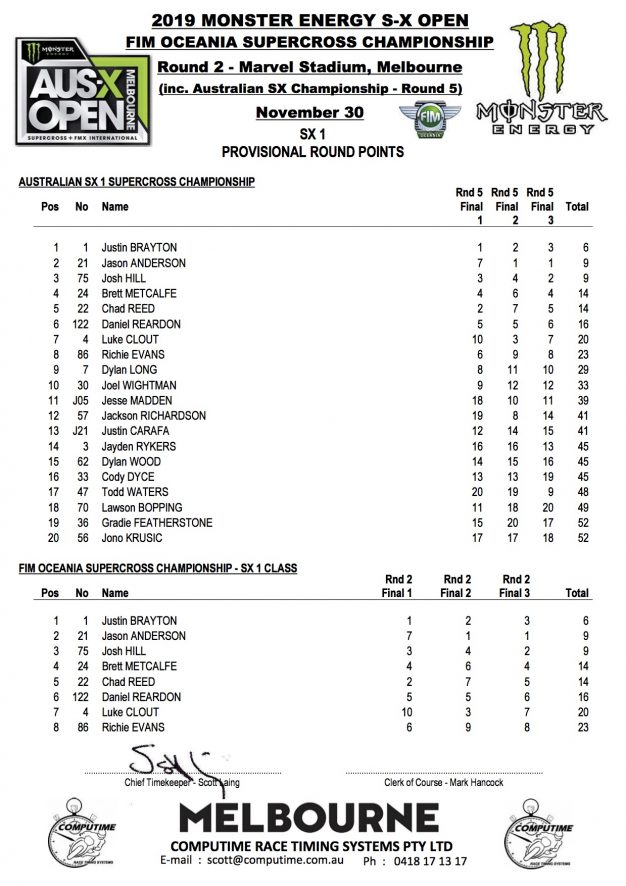