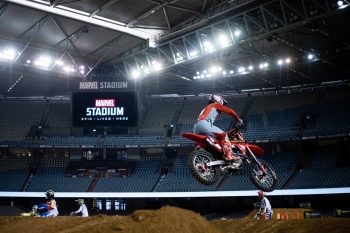 Organisers of the 2019 Monster Energy AUS-X Open Melbourne have confirmed the roof of Marvel Stadium will be closed for tomorrow night’s event.

AUS-X Open co-founder Adam Bailey indicated it was always intended to close the roof, which was a major drawcard in selecting the venue.

Bailey noted the closed roof guarantees perfect conditions for racing, while also enhancing the experience for race fans with off-track entertainment and effects.

“We were always going to shut the roof,” Bailey told MotoOnline.com.au. “And just because there’s daylight savings here, it doesn’t get dark until night anyway – it means we wouldn’t be able to put the lights out, do cool pyro, and the effects just aren’t as good.

“Closing it means we can control the environment. The whole vibe and feel of it is a huge part of what we do, so tomorrow’s going to be really special, and we need the roof closed for that.

“It’s a big mission to be in this stadium, and the main reason for it was the fact it does have a roof. It’s the right size so we can get a good crowd in, but also, the roof just adds comfort for the fans – it means the racing is guaranteed to be awesome because we don’t have to worry about a mudder.

“And it means we can control the environment with pyrotechnics, sound and lighting as well. There are a lot of benefits to it.”