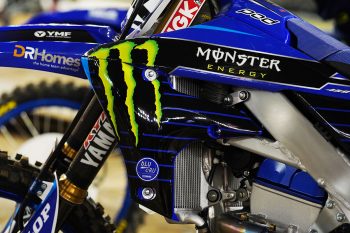 Based on the YZ450F that American guest Josh Hill has ridden since Wollongong’s third round of the Australian championship, SX1 leader Luke Clout and Dan Reardon will also use the updated look tomorrow.

According to CDR Yamaha Monster Energy team owner Craig Dack, the decision to line-up with the revised appearance at the finale comes as a nod of appreciation to the brand in what will be the largest supercross ever held on Australian soil.

“The purpose of Josh Hill coming over was based on the request of Monster Energy, since he’s an ambassador for them and they like to try and slot those types of ambassadors wherever there is a market overseas,” Dack told MotoOnline.com.au.

“Because of the Monster-sponsored events in New Zealand and Melbourne, they asked to have Josh come across and they pretty much covered the cost of that, so we wanted to give them a little bit more bang for their buck over our current bikes.

“Our bikes over the past couple of years have featured the official CDR Yamaha Monster Energy look, but because the last round is a Monster event and is going to be the biggest supercross ever in Australia, we wanted to display our appreciation. The CDR and Monster relationship is stronger than it’s ever been, being locked in long-term.

“They’re a great partner and sponsor, so out of respect and courtesy we’ve given them the increased branding for such a major event. We feel so privileged to be in this position, having Luke as an Australian leading the championship by one point – it’s an amazing story. This will be the most special event Australia has witnessed.”

Clout has been one of the topical talking points leading into Saturday night, taking over the championship lead in Auckland’s penultimate round a fortnight ago while teammate Reardon sits third, only nine points in arrears.