Osby not getting ahead of himself as AUS-X Open looms 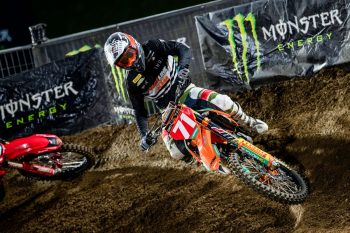 SX2 points leader Josh Osby isn’t getting ahead of himself as he prepares to secure a maiden Australian Supercross Championship at this Saturday’s Monster Energy AUS-X Open Melbourne.

Osby has positioned himself strongly in the four rounds hosted so far, picking up three podiums including an overall victory at Auckland’s penultimate stop of the series.

“We are carrying the red plate into the final round and this is where it counts the most,” Osby commented. “I’m approaching this round business as usual – I’ve put myself in a good position all season long with strong starts and track position.

“At times I have been a little too conservative, but I know if I execute my race plan that I have [had] all season long using my speed and experience, we will be in a good position to bring home the number one plate.

“This would be a huge achievement for myself and the Raceline KTM Thor team, but I’m not getting ahead of myself and will be focusing on doing my job on the night and the rest will fall into place.”