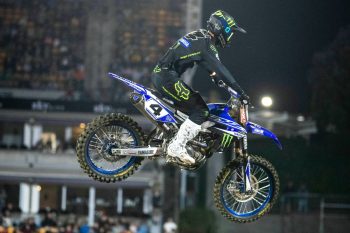 Luke Clout admits falling shy of the MX Nationals crown this year fuelled a fire for his Australian Supercross Championship campaign, which sees him lead the SX1 standings heading into this Saturday’s season finals at the Monster Energy AUS-X Open Melbourne.

The CDR Yamaha Monster Energy rider was positioned two points out of the lead heading into Coolum’s MX Nationals double-header championship decider, although he was defeated by eventual champion Todd Waters (Husqvarna) following a dominant performance.

A supremely consistent supercross season that boasts four podiums, including a maiden victory, has the New South Welshman in the box seat to win his first premier class title inside Marvel Stadium, where he holds a one-point advantage over AMA Supercross regular and three-time defending Australian champion Justin Brayton (Penrite Honda Racing).

“It wasn’t the end of the world that I didn’t win the motocross [championship], but it definitely fuelled the fire because I really put in during the off-season for supercross and did a lot of hard work with the team,” Clout explained to MotoOnline.com.au.

“We’ve put ourselves in this position to go and fight for the championship, so it’s kind of where I expected to be.

“There was obviously a bit of fire after losing the championship in the motocross series, but to be battling for both motocross and supercross championships is a feat in itself and I’m super proud of how the year has gone. We’ll see where we end up on Saturday night!”

This weekend’s championship decider will serve up a triple crown format, while added international talent will make for an incredible showdown in the title fight.