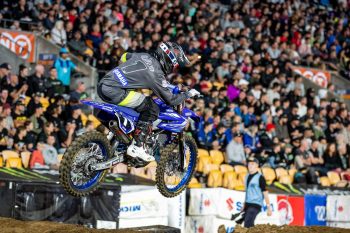 Wilson has demonstrated his championship-winning speed throughout the four rounds hosted so far, however a share of unfortunate circumstances in the multi-race formats is what has ultimately denied him of landing on the box. The popular Queenslander has scored race wins at Wollongong and Auckland.

This Saturday’s event inside Marvel Stadium serves as Wilson’s final opportunity to earn an overall win or podium, and the chance of still being crowned champion is prompting him to bring a nothing to lose mentality.

“Anything can happen,” Wilson declared to MotoOnline.com.au. “It’s not over, and with these three back-to-back races, it’s going to be quite intense, especially when the title is on the line – these boys can get into it.

“I’m just going to do what I can do – if I leave there in fifth or leave there winning, I’ve done all I can do and is what it is. For me, I’m going to put up a fight and see where that puts me.

“I feel like my riding, my bike, the team and everything is going well, I’ve just got to put it all together. That’s the aim for this weekend – I’ve got nothing to lose and everything to gain. I’ll do what I can do – all the other boys, their points are pretty close, so they’re going to be banging bars and going at it, and hopefully it’s my night to capitalise.”