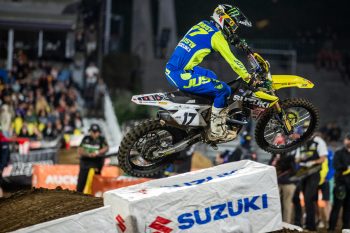 Organisers of the 2019 Monster Energy AUS-X Open Melbourne have released an official track map for this Saturday’s event, which will see it hosted inside Marvel Stadium for the very first time.

Over 6000 tonnes of dirt will be brought into the Docklands venue to build the full-size supercross circuit that will feature two complete rhythm lanes amongst a whoop section, triple, and ramp-to-dirt finish line jump.

The Repco Shortcut, which played an interesting role at the S-X Open Auckland earlier this month, will allow riders the opportunity to take advantage of the shortened lane just once across the triple crown main event format.

Youthful America-based Australian Jett Lawrence (Geico Honda) will also make his pro supercross this weekend, while the Australian Supercross Championship will come to a close, with both the SX1 and SX2 titles on the line.