Evaluating the SX1 and SX2 championship favourites ahead of Melbourne's decider.

This weekend’s Monster Energy AUS-X Open Melbourne will serve as the final round of the 2019 Australian Supercross Championship, leaving both the SX1 and SX2 titles up for grabs in what is set to be a thrilling championship decider. In this edition of Rated, we evaluate the chances of the title favourites earning a crown this Saturday night. 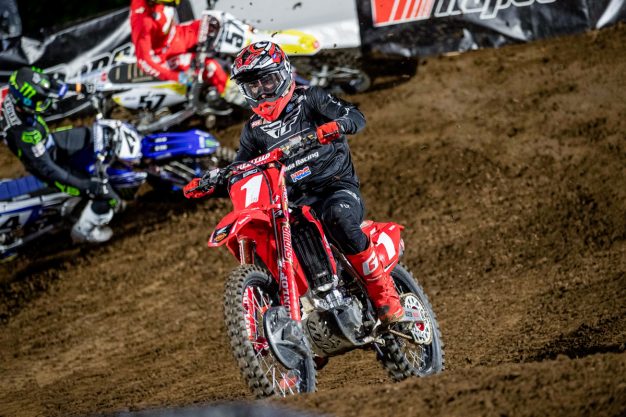 Rider: Luke Clout
Rating: A+
Rundown: Heading into Melbourne with the red-plate for the first time, Luke Clout is in the box seat to lift a maiden premier class crown. The CDR Yamaha Monster Energy rider only holds a one-point advantage though, meaning it will be a winner takes all affair inside Marvel Stadium.

Rider: Justin Brayton
Rating: A+
Rundown: For the first time since round one in 2016, three-time defending champion Justin Brayton will be sporting regular white backgrounds in Melbourne as he trails Clout in the standings. The Penrite Honda Racing contender has an abundance of experience on his side, which could be what gets him across the line for a fourth-consecutive championship.

Rider: Dan Reardon
Rating: B+
Rundown: CDR Yamaha Monster Energy’s Dan Reardon is still very much in the title hunt, positioned nine points behind his teammate Clout. Reardon will really need something to go wrong between the two current leaders to bridge the gap, but as the saying goes, anything can happen in supercross!

Rider: Brett Metcalfe
Rating: B-
Rundown: Penrite Honda Racing’s Brett Metcalfe still stands a mathematical chance, but being fourth in line and 17 points behind Clout, his chances are pretty slim. However, the South Australian has the opportunity to step onto the championship podium if he can overcome Reardon, who’s currently eight points ahead of him. Rider: Josh Osby
Rating: A+
Rundown: Not only does Josh Osby control the SX2 standings, but he’s also been in fine form. Holding a four-point margin over fellow American Chris Blose, it’s the Raceline KTM Thor rider’s to lose this weekend. The points gap will definitely favour him, but by no means can he cruise through the night.

Rider: Chris Blose
Rating: A-
Rundown: A strong and consistent night is what Chris Blose needs in his campaign at Melbourne to lift the SX2 title, and the triple crown will certainly test him. We all know the Penrite Honda Racing rider isn’t afraid to push his weight around, which is exactly what we anticipate he’ll do in Melbourne.

Rider: Aaron Tanti
Rating: B+
Rundown: Seven points out of the lead, Serco Yamaha’s Aaron Tanti will need to come out swinging this Saturday if he wants to claim his first-ever national championship. Tanti essentially has nothing to lose, as opposed to Osby and Blose, so you can expect him to lay it on the line in front of what will be a mega crowd.

Rider: Mitchell Oldenburg
Rating: B-
Rundown: Mitchell Oldenburg sits in a similar situation to his senior teammate Metcalfe, as he holds down fourth position, albeit 13 points off Osby. A mathematical chance, things will need to heavily swing in his favour, although claiming a championship podium, or even runner-up honours, is certainly achievable.