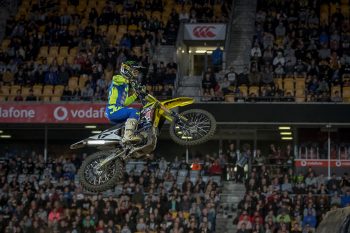 The SB Motorsports ECSTAR Suzuki race team were graced by greatness at the SX-Open Supercross Auckland on Saturday the 16th of November.

Playing host to the 4th round of the 2019 Australian Supercross Championship, Mt Smart Stadium was bought to life as some of the world best racers joined the Australasian regulars as the series stepped into overdrive.

Two of the big international stars joined the Suzuki pits for the weekend, with both Suzuki icon and the man known around the world as the GOAT (Greatest of All-Time) Ricky Carmichael, along with newly signed JGR Suzuki racer Joey Savatgy aboard his Factory Suzuki RM-Z450 for the first time.

For the team’s two Australian racers, Jayden Rykers and Cody Dyce the round was another excellent learning experience, as both push towards completing their first full Australian supercross series.

Rykers who headed into the round sitting 9th the championship standings, got the team’s day off to a great start, narrowly missing the holeshot in his heat, before Dyce managed to go one better in the second SX1 heat race, leading the field through the first turn.

Both riders transferred straight through to the nights three-race main event format, where they struggled to adapt to the track conditions, with Rykers posting, 16 – 13 – 16 race results to finish the round in 16th position, while Dyce had to settle for a 17-14-15 score card to finish one point behind Rykers in 17th.

“Certainly not the results I was chasing tonight, but I am out there taking notes and learning more about Supercross every time I hit the track.” Rykers commented.

“The last few days have been a great experience, and I can’t thank both the team and my supporters, including Byrners Motorcycles and SPMX who came along this weekend to help out.

“I am looking forward to finishing the series out in Melbourne; we are still sitting 10th in the championship, so we will go there and do our best and see where we end up.”

For Dyce, the round was not what he was hoping for after his great results the week prior at Wollongong, but he is keen to get home and race at Marvel Stadium in front of his home town crowd.

“I was really looking forward to this round after the results at round three, but things just did not go as well this weekend.” Dyce commented.

“My start in my heat race was great again, but I just could not find the flow I was looking for and rode a little tight.”

“We have one more round, and for myself, it is the one I am looking forward to the most, it is close to home and the biggest event of the year, I can’t wait to get on track.”

For team owner the Scott Brewster, while the final results were not quite there for the team, it was a great experience to spend the weekend with one of the greats of the sport under the team’s tent.

“Both Jayden and Cody continue to learn and pick up new things at each and every round, neither of them had completed a single round of Supercross before this season, to be heading into the last round with Jayden sitting 10th in points and Cody just outside the top ten is a great achievement.” Brewster commented.

“To see both boys get holeshots again was a testament just how good the Suzuki RM-Z450 really is, Cody’s bike was straight off the showroom floor for this event, and he outraced some of the best factory bikes out there into the first turn.”

“The weekend here in New Zealand has been great, the amount of support from Daryl Hurley and his shop Action Moto, has been unbelievable, they have gone above and beyond to make this weekend possible for us along with the support of Adam Byrne and Steve Powell who have both flown over from Australia to help out this weekend.”

“It was a little unbelievable to have both Ricky and Joey pitting with us here in New Zealand, and I can’t say enough about both of them,” Brewster continued.

“Ricky was just so down to earth and helpful, talking to both Cody and Jayden about the track, getting their thoughts and giving them a few tips and then RC would work on his own bike between his rides on track, everything from checking spokes and filling the gas!.”

The SB Motorsports ECSTAR Suzuki Racing team will now head to Marvel Stadium for SX-Open Melbourne for the final round of the 2019 Australian Supercross Championship on Saturday the 30th of November.