Auckland a step in the right direction for defending champion Wilson 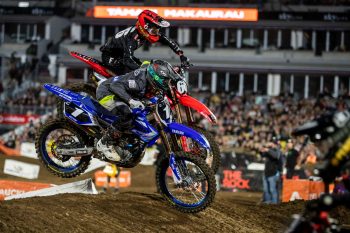 Jay Wilson believes his fourth place finish at the 2019 Monster Energy S-X Open Auckland is a step in the right direction, the reigning SX2 champion once again narrowly missing the podium.

The Yamalube Yamaha Racing challenger looked primed to secure his first podium of the 2019 Australian Supercross Championship, securing a race win in main event two, however fell one point shy of the box.

The Queenslander went 5-1-4 for fourth overall, and sits fifth in the championship standings – 20 points behind leader Josh Osby (Raceline KTM Thor) with one round to go.

“Tonight was another good step in the right direction,” Wilson stated. “I qualified better, and I felt I fought it out in every lap of every race, but that round win still eludes me. My starts weren’t ideal, but I was able to get track position pretty quickly and be up front early.

“I got myself into a good position early in race one, but then two riders used the short cut to finish ahead of me. Race two, I was in the top four again and just pulled it early to get clear and was able to stay in front for the win. By race three most of the good guys had already used it so it was almost a normal race.

“I have one more chance to win this year in Melbourne and to do that at the biggest race of the year would be awesome. I want to keep the upward trend going on my results and Marvel Stadium would be the perfect place to get my first round win of the year.”

The Monster Energy AUS-X Open Melbourne is scheduled for 30 November at Marvel Stadium.