Nothing to lose for Tanti as SX2 title fight heats up 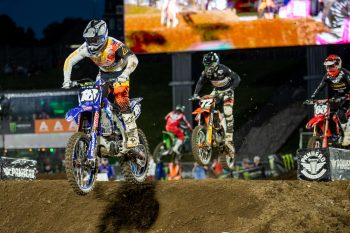 Tanti put on another impressive display in New Zealand, racing to 3-4-2 results in the triple crown to earn third overall at Mt Smart Stadium.

Despite Osby marginally strengthening his lead, Tanti remains very much in the hunt with just the AUS-X Open Melbourne remaining, where he believes he’ll lay it on the line and see what unfolds as a result of his approach.

“It’s always good to get on the podium and we were again able to do that tonight,” Tanti begins. “My pace was pretty good all night and it was just a matter of not getting caught up in the craziness at the start of each race as there were lots of bikes and riders going everywhere.

“I would like to have made up a couple of points tonight, but with just seven points between the top three, the pressure is on the guys in front of me,” Tanti commented.

“I can turn up in Melbourne and just go for it and see where it takes me. I have nothing to protect or lose, so I might as well lay it all on the line and see what comes of it.”

Set to be staged inside Marvel Stadium, the AUS-X Open Melbourne is scheduled for 30 November.