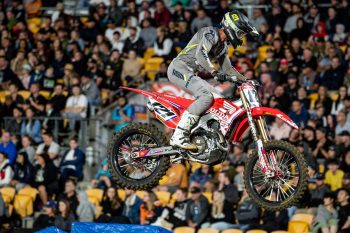 New Zealand fan-favourite Cody Cooper says he enjoyed his return to supercross competition in front of a home Kiwi crowd at the Monster Energy S-X Open Auckland last weekend, despite admitting he was out of his depth amongst the premier class.

Cooper, who made his last full-time supercross campaign during the 2017 New Zealand series, showed strong form considering his time away from the discipline, recording 13-15-10 scorecard for 15th overall.

“I had a fun time in the end,” Cooper stated post-race. “Qualifying I was going to pull a hammy and pretend I did that [laughs] – I was a bit out of my depth there I think. I ended up having a good time and I was happy I did it.

“For me, it was good to have a Kiwi out there I guess circulating. I sort of found my flow in the first one, and I had to have a recovery ride in the second one and sort of go better in the third one.”

Cooper was the sole New Zealand contender in the premier class, while former world champion Ben Townley put on a show with the greatest of all time, Ricky Carmichael, in the unique ANZACs Vs USA Showdown.