Auckland triple crown ‘took it out of me’ admits Hill 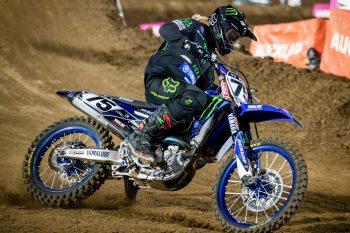 While Hill raced the same format one week earlier at Wollongong, New Zealand’s Mt Smart Stadium delivered a much more challenging track for the trio of eight-lap outings.

“I thought my speed was good tonight, but with the three-race, back-to-back sprint format, it just took it out of me,” said Hill. “With three starts and short races, the intensity is so high that it is really demanding physically. I just need to be fitter to handle it, and you only get that by doing more racing.

“But, I’m still happy with how things are going, and the event was awesome. It’s great to come to New Zealand and the fans have been so friendly and the CDR Yamaha Monster Energy team has been great to work with.

“We have one round to go and I would love to get a round win or at the very least on the podium before it’s done. I think we have the tools to do it, I just need to make it happen.”

After missing the first two rounds, Hill sits 11th in the Australian Supercross Championship SX1 standings ahead of the Monster Energy AUS-X Open Melbourne on 30 November.