Metcalfe nostalgic on the way to breakthrough Auckland podium 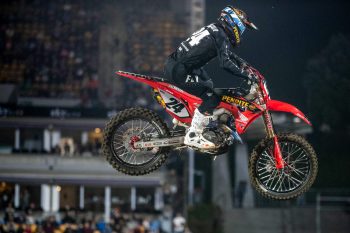 Brett Metcalfe has described racing against the likes of Jason Anderson (Rockstar Energy Husqvarna Factory Racing) at the Monster Energy S-X Open Auckland as nostalgic, his breakthrough podium finish alongside the American import ‘taking him back’ to his time in AMA Supercross.

The Penrite Honda Racing challenger was impressive all night long, leading a portion of main event one before going onto record a 2-5-3 scorecard for third overall.

The podium, which marks Metcalfe’s first of the series, comes as a timely boost for the South Australian after experiencing a pair of admittedly challenging appearances at Port Adelaide and Wollongong.

“It was good – the first round of this series went good for me, then I had a big crash at Adelaide which took the wind out of my sails,” Metcalfe explained. “It’s nice that the body is feeling better, I’m feeling good and having some good rides. It was fun.

“I’ve spent a lot of time in the States – that first race I was leading, and Jason [Anderson] came by me, and just to get a smell of that race gas – oh man, it took me back to the AMA days. I’m like ‘yeah this is good, riding with one of the best guys in the world right now – this is awesome’.

“I was having a good time – I struggled a bit in the whoops and lost a couple of spots there. Luke [Clout] is riding great this year and the competition’s deep here, especially with the injection of Jason, Joey [Savatgy] and Chad [Reed]. It’s just good vibes riding at the front.”