Notes from trackside in NZ at round four of the AUS Supercross season.

– Despite rain being forecast for much of the week leading up to Saturday in Auckland, thankfully it never really did eventuate. As a result, Monster Energy S-X Open organisers had a far better preparation for the 2019 edition in the sunshine, the weather was supreme on race-day and a mega day out was enjoyed by all by the looks of the appreciative fans in the stands.

– You could tell from when he turned up at press day and then again on Saturday that Chad Reed was feeling the effects of his crash in Paris last weekend, but he still attempted to see if the adrenalin of a gate-drop would help him overcome the severe pain of two broken ribs on game-day. An early crash in his heat marked the end of his night, however, he hopes to be back by Melbourne.

– Since Auckland is a flyaway race for the Australian Supercross Championship regulars and also the visiting high-profile Americans, the pit is largely made up of marquee-type tents situated side-by-side in a small area alongside the stadium. What that does is make for an unusual vibe of everybody communicating more, naturally seeing each other more and generally having a good time between the on-track business.

– While the likes of Reed, Jason Anderson, Joey Savatgy and co’s bikes can be found in the regular pit area, those guys would usually be based in their change rooms beneath the stadium aside from the odd trip up to the pit to see how they’re crew and equipment are. After a relaxed tour of Auckland and its attractions late in the week, it was time to get down to business once the show started. – Speaking of Savatgy, he never really appeared ‘on’ in NZ as he continues to adjust to the JGR Suzuki RM-Z450. No doubt the seat time was important, but after qualifying sixth and then going 11-6-DNF for 11th overall, it was a tough night on a technical full-size supercross track. He will be heading back home prior to Melbourne for added testing and preparation, so expect him to come out stronger in Australia.

– Coming into the S-X Open series, Australian championship contender Luke Clout told his family that the aim was to beat all but current AMA front-runner Anderson, which he was able to do. It was a glowing night for the CDR Yamaha Monster Energy rider – who turned 25 earlier in the week – as he rode to second overall after winning the second final of the night! As a result, Clout has taken the points-lead! He confirmed in the post-race press conference that the plan is to race the opening portion of American Supercross in 2020, which the rumours suggest will be part of a switch back to Honda locally for next season.

– Something is up with Penrite Honda Racing’s Brayton. We heard he’d crashed heavily prior to Wollongong and last night the number one plate-holder admitted that he hasn’t been riding mid-week and was genuinely glad to get through the past two rounds at a time he didn’t really expect he’d be able to. The thing is, he stopped short of saying what exactly he’s dealing with and opted not to say when asked, at least until after Melbourne. Still, he’s on the mend and was content with last night’s result, even though he lost the points-lead due to an uncharacteristic crash in final three. – You had to be happy for South Australian mainstay Brett Metcalfe in NZ, rising for a podium finish among his former US peers in his best showing of the year. He was stoked at the end of the night and, as one of the good guys of the sport, you could tell even the likes of Anderson and Clout were pumped to see him land up on the podium with them. This season hasn’t gone to plan so far, but he showed last year just how competitive he is at supercross and that was evident again last night. He’s actually now fourth in the standings, within striking distance of Dan Reardon for a top three finish again at just eight points behind.

– The relay race between Team ANZAC and USA was essentially set up to be a showdown between ‘The GOAT’, Ricky Carmichael, and New Zealand icon Ben Townley. They didn’t disappoint! After going back and forth, rubbing plastics and coming together in an incident that would see BT go down, RC went on to take victory in what was an entertaining battle. According to Kiwi legend Cody Cooper in the post-race press conference though, the race had to continue later at the bar!

– There was some confusion in the afternoon when organisers confirmed with us that the event would be streamed live on Kayo Sports in Australia, since it was delayed on Fox Sports. The problem was, Kayo’s app didn’t actually display the event right up until the opening ceremonies and their customer service representatives were advising those who asked that it wouldn’t be on live. In the end, everything was solved and the show was aired as planned, albeit under the incorrect ‘NZ-X Open’ title. 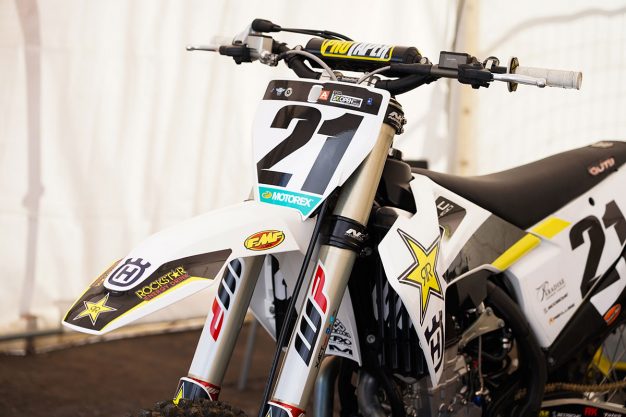 – With Clout now leading the Australian SX1 Championship and Anderson the Oceania series leader, the question was posted in the press conference whether or not there will be two red plates on display in Melbourne. Anderson said he didn’t think they had any, but there is time to organise some for his Rockstar Energy Husqvarna FC 450, so we’d be tipping you will see double red plates at the finale.

– The triple crown format made for frantic racing at its very best in SX2 the trio of finals, in which three different winners emerged. Title-leader Josh Osby (Raceline KTM Thor) won the opening bout, defending champion Jay Wilson (Yamalube Yamaha Racing) topped final two and Penrite Honda Racing’s Chris Blose captured the third outing. It was Osby though who won the overall, now four markers ahead of Blose and a further three in front of leading Australian, Aaron Tanti (Serco Yamaha), who was third in NZ.

– We’ve seen shortcuts each year at S-X Open events, but last night’s one in Auckland provided a full five to eight seconds quicker than a usual lap-time if you got a clean run at it! Funnily enough, both Clout and Anderson used it in final two since you could only use it once, and that’s the lone race that Anderson didn’t actually win. He was super-complimentary of the level that Australians are currently at post-race, crediting countryman Brayton for raising the bar in Australian supercross.

– One of the most impressive riders of the night had to be Josh Hill, the American who made his second appearance as part of CDR Yamaha Monster Energy in a deal primarily funded by the energy drink giant. He was third in the second final, which was his best showing of the night, but for a rider who doesn’t compete full-time anymore you can’t deny just how capable he is on a supercross track.