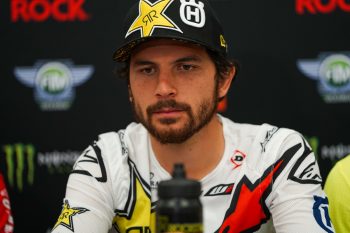 The 2018 AMA Supercross champion raced just the Sydney stop of the Monster Energy S-X Open International FIM Oceania Supercross Championship last year, with this weekend’s round in New Zealand marking his first appearance in the country.

“I think you need to have good race craft, and picking and choosing your battles is how you should race in the States,” Anderson explained at Auckland’s press conference.

“I probably won’t be taking as many risks as I would when I’m going for a supercross championship – I’m still going to go for it, and it’s not going to stop me at all. I’m going to try and win those races – it’s going to be good, and those eight lappers I think [it is], it’s going to be tight racing.”