Richardson pressing on in Auckland despite round three crash

Popular Queenslander hopeful of turnaround in form this weekend. 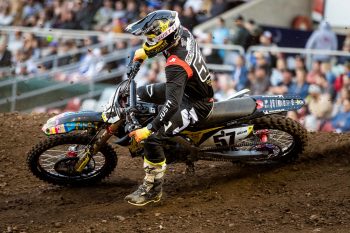 Dual SX2 champion Jackson Richardson will press on at this weekend’s Monster Energy S-X Open Auckland despite crashing heavily in the opening main at Wollongong’s third round of the Australian Supercross Championship last weekend.

It’s been a challenging start to the popular Queenslander’s rookie SX1 campaign, breaking a number of toes in his foot at Brisbane’s opener before another incident at Port Adelaide saw him reaggravate the injuries. His race one crash in New South Wales saw him make a premature exit to the night.

Richardson is hopeful of a turnaround in form this Saturday in New Zealand, with the round marking the opening stop of the 2019 Monster Energy S-X Open International FIM Oceania Supercross Championship.

“I wish I was a bit more upbeat about these updates, but lately we have not had much to get excited about,” said Richardson. “I had another tough weekend – I had another gnarly get off in the main event and banged myself up pretty good.

“Hoping to turn this season around at New Zealand this weekend. I can’t thank each and every one of you enough for the support, it means the world to me.”

Richardson is ranked 18th in the championship standings with 13 points to his name as just two rounds remain in the series.