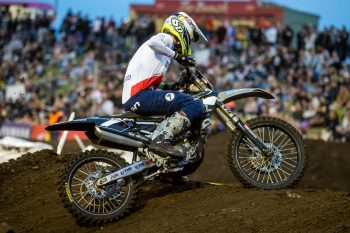 A surprise SX2 victory in main event three at Wollongong’s third round of the 2019 Australian Supercross Championship has come as a timely boost of confidence for Connor Tierney, the Yamaha-mounted privateer confirming his potential after a number of difficult seasons.

The Western Australian lodged an 11-13 scorecard in the opening two mains, however an excellent start in race three granted him a clear path to victory over newly-appointed points leaded Josh Osby (Raceline KTM Thor), crediting him seventh overall.

“I got a good start – actually, I got a sick start,” Tierney stated to MotoOnline.com.au. “It was probably around lap three where I put my head down and rode my own race – the guys were battling behind me, and I was just doing my own thing. I didn’t make any mistakes and just rode it home – it seemed like it came easy to me.

“It felt so good – it’s been a long time since I’ve won a race at a national calibre event, so it really felt good and gave me such a confidence boost. It’s good to have those moments – I feel like I really need to savour it, because it’s hard to stay in this sport with injuries and everything – results like that make it worth it.”

Tierney sits eighth in the championship standings as the series heads to New Zealand this weekend for the Monster Energy S-X Open Auckland.