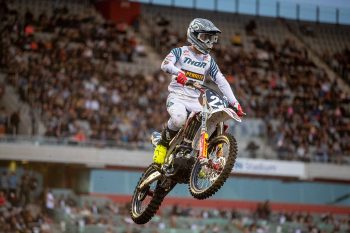 The 2019 Australian Supercross Championship roared back into life on Saturday night (November 9) with round three staged at WIN Stadium, Wollongong, NSW, in conjunction with the first-ever Australian Motorcycle Festival and drawing a sizeable crowd of enthusiastic fans for a night of close and exciting supercross competition.

Penrite Pirelli CRF Honda Racing team riders Kyle Webster and Rhys Budd were in the thick of the SX2 class action, the Honda duo finishing the round in 10th and 13th places respectively after an action-packed three finals on the night.

The Wollongong event marked Webster’s return to racing, after the current Australian MX2 championship runner-up was sidelined from round two last month after suffering collapsed lungs in a training crash.

“It was awesome to get back behind the gate and get on with racing again,” enthused Webster of the Wollongong event. “I got the holeshot in my Heat race and finished second behind (reigning SX2 champion) Jay Wilson, which was a really good kick-off to the night.”

On a technical and challenging track where strong starts were vital to success, Webster timed an excellent jump of the start gate in the first Final, only to be pushed wide in the first turn, which saw him subsequently run at the tail of the leading pack to finish the race in seventh place.

“In the second Final, I got an awesome start and thought I was on for another holeshot,” Webster pumped, “but then someone slammed me and pushed me wide again. Then on the first lap I landed on another rider over the triple because he backed out and I was already committed, so I went down and then had to fight back to finish the race in 14th.”

In the third and final moto, Webster made a strong start and put on a couple of passes to finish the race in sixth place.

“Overall the night was okay,” offered Webster, who finished 10th for the round, “and I had fun racing and felt like I rode okay after being sidelined from the previous round.

“We’ve got two more rounds of the championship over the next few weeks, in New Zealand and then in Melbourne, and I’m really looking forward to them and would really like to crack the top five, which I think is a fair goal, and anything better would be a bonus.”

Second Penrite Pirelli CRF Honda Racing team rider Budd also enjoyed the Wollongong event, despite his evening kicking off with a crash in his Heat race while running third, which forced him to the Last Chance Qualifier.

“But in the LCQ I rode a solid race and took the win, which was great, but it left me with a bad gate position for the three Finals,” Budd explained.

“The first two Finals went well and despite having to start from wide on the grid, I finished eighth and tenth, which was good. But then in the last Final, a horrible start really cost me and overall I finished 13th for the round.”

Both Webster and Budd are now looking forward to jetting out to New Zealand this week to contest round four of the championship in Auckland on Saturday night (November 16). It will be Budd’s first trip to New Zealand and the young Sydney racer is hoping to finish the season strong and stay in the top ten placings.

After the trans-Tasman tour this weekend, the 2019 Australian Supercross Championship will reach its crescendo with the fifth and final round, the AUS-X Open event being staged at Marvel Stadium in Melbourne (Vic) on November 30.