Differing opinions for title favourites from Saturday's third round of AUS Supercross. 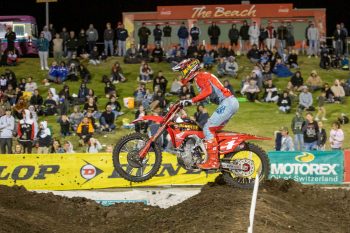 Australian Supercross Championship heavyweights Justin Brayton and Luke Clout have shared divided opinions on the severe degradation of Wollongong’s whoop section on Saturday night, which saw a selection of riders utilise a near flat line on the edge of the circuit.

Penrite Honda Racing’s Brayton, who recorded his first blemish of the season in third overall, expressed his frustration over the section where riders seemingly gained an advantage, explaining he’s at a loss as to why the portion of the track wasn’t maintained for greater consistency.

“Absolutely, [the track] was [sketchy]. The biggest thing, and it’s a bummer, is that they left the whoops the way they were,” Brayton told MotoOnline.com.au post-race.

“On the right side, there were three whoops and the rest were all flat. It’s just a bummer that at the highest level of racing they’re like that. I was still going through the middle, but when you’re out front, you just go down the right side. That’s my strong point… it’s all good, I’m happy to keep the points lead.”

Clout broke through for his maiden SX1 overall victory, although the CDR Yamaha Monster Energy rider disagreed with the three-time defending champion’s opinion, offering that the line remained within the track limits, while officials didn’t feel it was necessary to hand down any penalties.

“I did nothing different to anyone else and I only started doing that because 99 percent of people were doing it. I was happier to go down the middle of the whoops, but if everyone else is doing it and it’s in the track limits, then there’s no cutting of the track. It is what it is.”

The duo are now separated by just three points heading into New Zealand’s penultimate round this weekend for the Monster Energy S-X Open Auckland.