Notes from trackside in New South Wales at round three of the season.

– There almost wasn’t a track altogether at WIN Stadium after the first loads of dirt carted in for the track build were deemed too rocky and unworkable by organisers. Troy Bayliss Events (TBE) had trouble sourcing that initial dirt in the Illawarra region, so you can understand the panic when it was acknowledged a different type of dirt had to be brought instead. The result of all that was a late and compromised track that was only just completed in time for practice!

– With little time to prepare, practice was a dusty affair, especially in the warm conditions encountered over the weekend. It was a shame because it set the tone for a somewhat disappointing event, considering the standard and opportunity of hosting supercross at a National Rugby League (NRL) venue. There ended up being only one true rhythm section and the track broke down over the course of the night program, but thanks to Josh Proctor and the team at Protraxx for their efficiency in trying circumstances, the show did go on.

– There was a small dose of tension at the podium post-race when defending SX1 champion Justin Brayton and the Penrite Honda Racing team were left frustrated by the flat line that developed in the right-hand side of the whoops. He didn’t think it should have been an option, but overall winner Luke Clout – who was taking the low line in final three at least – said it was legal and a legit option. Both were correct in their own right. – Speculation was doing the rounds in Wollongong that Brayton was ‘off’ due to a mid-week crash. He never did confirm it directly, but the American definitely wasn’t his usual self even if he did sprint to the first final win of the night. Regardless, what we’re seeing now is a super-close title fight as Brayton leads Clout by three points, with his Monster Energy CDR Yamaha teammate Dan Reardon a further three in arrears with just two rounds remaining!

– The first triple crown format of the year resulted in a couple of extremely impressive performances on Saturday night, outside of the usual suspects. Suzuki-mounted Cody Dyce starred in SX1 final two by finishing amongst the best in the business for P3. Meanwhile, in SX2 we saw Connor Tierney come out of nowhere (he was 11th and 13th in the opening two finals) to win the third encounter! That ride earned him a Serco Yamaha seat for the season-remainder since US import Jacob Hayes unfortunately injured his shoulder. Others to land on the podium in races included Bradley Taft and Regan Duffy, while Jay Wilson won final one only to encounter tough luck on his way to sixth overall.

– For the second time this season, the Penrite Honda Racing CRF250R of Chris Blose had an updated livery, this time with Plus Fitness holding the major share of the shrouds. A company relatively local to the area, it was a timely addition since the American – who is himself a huge fan of the Wollongong round – went on to take the victory in SX2 overall.

– A unique aspect of the Wollongong round was that the supercross was held in conjunction with the first-ever Australian Motorcycle Festival situated right alongside at Lang Park. With a host of manufacturers in attendance offering road tests and more, plus the likes of Robbie Maddison completing his share of stunts in the Belmore Basin, the vibe was one of a kind. An extended pit area placed riders/teams in the stadium entrance all together, as their transporters were either in the festival or across the other side of the stadium.

– Of course, following three events operated by TBE, the final two stops of the series will form part of the two-round Monster Energy S-X Open International Supercross FIM Oceania Championship. Bikes had to be ready by 11:00am on Sunday morning to be freighted to New Zealand for the Auckland round next weekend, making for a tight turnaround to travel through international customs. Following that, it will be a two-week turnaround for AUS-X Open Melbourne at Marvel Stadium.

– We published the unfortunate news on Friday afternoon that DPH Motorsport had been ordered into liquidation and that Todd Waters would be racing a privately-entered Husqvarna at Wollongong, which was the case by all indications. However, he was wearing very similar DPH Racing (rather than DPH Motorsport) logos on both his gear and the FC 450 throughout the round. Keen observers will have noticed that the DPH Racing business name was registered with ASIC just one day prior on 8 November 2019. 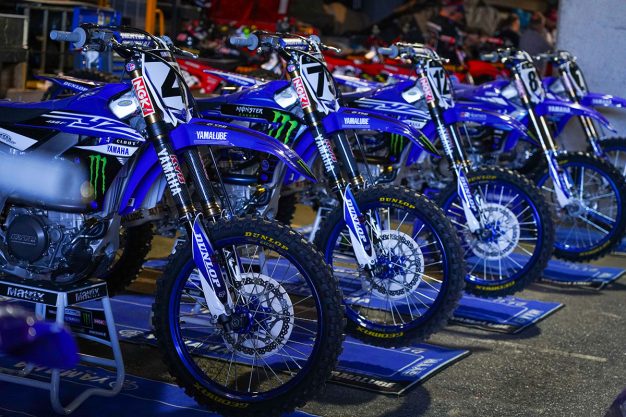 – It’s been a rough start to his premier class career for Jackson Richardson, who crashed heavily once again at round three in the opening SX1 final. The final lap crash while running inside the top 10 ended the North Queenslander’s night, which was a real shame considering the impressive privateer effort he’s put together with major support from Rockstar Energy Drink and he also has lured in longtime mechanic Peter Macalpine to help out on the tools.

– There was no denying that the rider numbers were particularly strong for the WIN Stadium round, with 26 riders entered for SX1, as well as 26 in SX2, 16 for each of the junior categories and 20 in the YZ65 Cup. With that kind of participation in supercross at a national level domestically, it can only mean positive things for the sport moving forward.

– Two new faces on factory teams in Wollongong included the high-profile arrival of Josh Hill at CDR Yamaha Monster Energy alongside Clout and Reardon and also Henry Miller, who has signed with Raceline KTM Thor for the rest of the series also in SX1. Hill was impressive considering his lack of racing in recent seasons, going 5-5-3 for fourth overall and he even won his heat!