American to be joined by Vlaanderen and Lupino at Gebben Van Venrooy Yamaha. 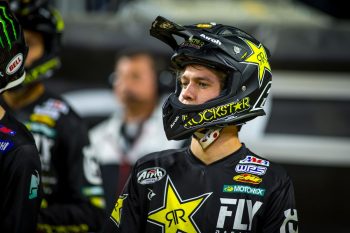 After one season on the AMA circuit, American Thomas Covington will end his time with factory Husqvarna in favour of a return to the MXGP World Championship in 2020, where he’ll make his premier class debut with the Gebben Van Venrooy Yamaha Supported MXGP Team alongside Calvin Vlaanderen and Alessandro Lupino.

Covington, who started his professional career in the MX2 World Championship, returned home to contest both the AMA supercross and motocross championships with Rockstar Energy Husqvarna Factory Racing, however a luckless year battling Epstein-Barr virus saw him struggle to reach his potential.

“I’m super excited to be coming back to MXGP for the 2020 season,” said Covington. “Especially with a great team like Gebben Van Venrroy with the support from Yamaha. I’m looking forward to a fresh start to show what I can do in the premier class.”

Vlaanderen, who recently assisted Team Holland to victory at the Monster Energy FIM Motocross of Nations (MXoN), will also step up the MXGP class after previously holding down a MX2 spot with Honda HRC.

“I am really excited to have signed with Gebben Van Venrooy Yamaha Supported MXGP Team for 2020 and I am extremely grateful for this opportunity,” Vlaanderen explained. “I’m really motivated to move up to the 450cc and although everything will be new to me and it will definitely be a learning year.

“I feel I have had some incredible experiences in MX2 that I can carry with into the bigger class and I feel like I can get some good result. The team is awesome and extremely motivated especially with the switch to Yamaha, and I get a good feeling from that. I know that we will work very hard for the upcoming season.”

Lupino will remain on the Gebben Van Venrooy team for a third season. The Italian is excited to enter his fifth season inside the premier class with the familiar support of the Dutch squad, along with Yamaha support.

“I’m really happy to be back on Yamaha,” Lupino commented. “I made my world championship debut on Yamaha and I was a part of the Yamaha family for many years, so it is really nice to be back on a blue bike especially with this team because they have worked so hard over the last two years that I have been with them.

“The team started out as a small team and they have improved year after year, so I am happy that next year we will line up with a very strong team. I think that with my teammates Thomas Covington and Calvin Vlaanderen, we can do a lot for the team, and I know they will do a lot for us. I am looking forward to training with them and I think it will be a great and fun season.”