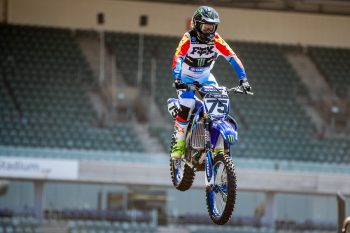 American Josh Hill has declared his intentions as he embarks on his Australian Supercross Championship return this Saturday at Wollongong’s third round.

Hill, who raced the 2013 Australian supercross series, will pilot a CDR Yamaha Monster Energy YZ450F throughout the next three rounds of the season.

The popular contender last raced supercross competitively in 2018 when he made a selection of appearances with Monster Energy Yamaha Factory Racing in the AMA Supercross series, and following a strong lead-up to his return in Australia, he’s aiming to be as ‘competitive as possible’.

“It’s super refreshing to be back in Australia,” Hill commented. “It’s been a while since I was here, and I’m stoked to be getting back behind the gates and battling with the boys.

“While I’m here I want to be as competitive as possible, I’ve got a great bike – the CDR guys hooked me up with a ride and being on this team, there’s no sense in going out there and doing it halfway.”

Tomorrow’s night show at WIN Stadium will kick-off at 5:30pm local time, as the event runs alongside the inaugural Australian Motorcycle Festival.