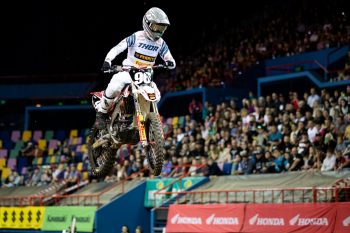 Kyle Webster has reacted to the news that Penrite Pirelli CRF Honda Racing will sit out the 2020 season, however the Western Australian has indicated his future is ‘all sorted’.

It was revealed yesterday the privately-operated CRF Honda Racing squad, which currently fields Webster and Rhys Budd, will go on hiatus next year after being unable to come to terms on an extended arrangement with Honda Motorcycles Australia, but will endeavour to return for 2021.

Webster, 23, has been a long-time member of the squad after joining the team in 2016, most recently finishing runner-up in the MX2 category of the Pirelli MX Nationals while also representing Team Australia at the Monster Energy FIM Motocross of Nations (MXoN).

“It sucks, obviously,” Webster stated to MotoOnline.com.au. “It’s one less team in the pits now, but I can understand why Mark [Luksich] has decided not to continue next year – at the end of the day, it’s his call.

“If he can get back into it sooner rather than later, it will definitely be a good thing. I’m all good and all sorted for next year – I can’t give out too many details at the moment.”

Webster has been linked to a 250 deal with Yarrive Konsky’s Penrite Honda Racing team next year, which is understood to have already signed its riders for 2020.

The number 96 recently sustained an injury while training for the Australian Supercross Championship, however has been cleared to recommence riding ahead of round three at Wollongong on 9 November.