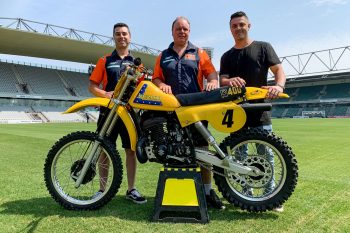 It’s been revealed a selection of motocross and supercross legends will feature in a parade at Wollongong’s third round of the 2019 Australian Supercross Championship on 9 November.

The trio will be accompanied by motocross and supercross royalty Craig Dack, Stephen Gall and one of Australia’s most recent champions, Dean Ferris, making it five decades worth of title winners.

“To see the names Gunter, Gall, Dack and the Marmonts on one grid will be a chance in a lifetime, they are among the Australian riders who shaped Australian motocross and supercross,” said TBE co-owner Troy Bayliss.

“The Gunter Vs Gall, along with Dack rivalry, was huge back in the ’70s-80s and early ’90s, and to see these legends of the sport take to the track once again will be a very special occasion. True fans of the sport can show their appreciation for the part all these legends and champions played in the premier years of Australia supercross racing.”

Round three of the supercross series will be packed with entertainment, running alongside the Australian Motorcycle Festival, while also hosting the Australian Speed and Style Championship inside the WIN Stadium venue.