Privately-operated team considering a return in the future. 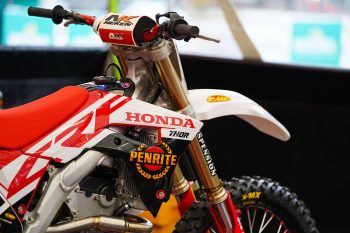 CRF Honda Racing will be sidelined through the 2020 MX Nationals and Australian Supercross Championship season after being unable to come to terms on an extended arrangement with Honda Motorcycles Australia, but will make a bid to return for the following year.

The pair will amicably part ways at the end of the current supercross season and CRF Honda Racing team owner Mark Luksich has indicated that it’s currently too late to join forces with an alternate brand to go racing at the level required.

“I can confirm that I won’t be running a Honda team next year,” CRF Honda Racing owner Luksich told MotoOnline.com.au. “It is regretful, but they’re restructuring how they are going racing and how to position their budget. I will remain involved with the MXoN, which I have for 30 years, and we will be looking to get back into racing at the soonest possible time.”

Luksich has a longstanding history with Honda dating back to the days of Glen Bell and also is recognised for his contribution to Team Australia at the Motocross of Nations (MXoN). His CRF Honda Racing team led Kyle Webster to second in the MX Nationals MX2 championship this year, falling just short of the crown following Coolum’s finals.

With an evident passion to see the sport thrive locally, Sydney-based businessman Luksich – who operates his automotive business, Brandlines, full-time – has every intention of regrouping with a new manufacturer from 2021: “Absolutely, I’ve got every intention of coming back with the team in 2021 and on my terms,” he added.

While Honda is yet to confirm its racing operations from next season, it’s widely speculated that the Penrite Honda Racing program of Yarrive Konsky will expand its presence outdoors with a two-rider MX1 program and could also draft Webster in as its MX2 entry. The factory team is also exploring options to compete in the US next year.