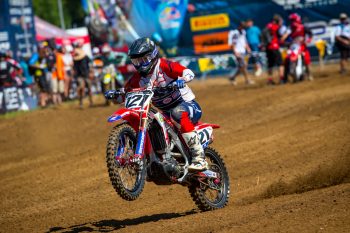 Cooper, a seven-time premier class champion in New Zealand motocross, has made a number of privateer stints in the Lucas Oil AMA Pro Motocross Championship over recent years, however his last full supercross campaign was in the 2017 New Zealand supercross series.

“Going last year, I got to see first hand how good of an event it is for supercross and motocross in New Zealand, so when I was asked this year I just had to be a part of it,” Cooper explained.

“To be racing supercross in front of 20,000 plus New Zealanders, yelling and screaming inside a stadium like Mt Smart, it’s going to be nuts, and to be given the opportunity to ride an event like this against the world’s best, you just have to take it while you still can.

“It would be awesome to get a result in New Zealand, I always seem to ride better when I’m at home, I have better peace of mind, I dig deep, but I know it’s not going to be easy with the level of competition that is competing this year.

“There are a lot of good riders coming, with a lot more experience, but I like being the dark horse so I’ll watch what they are doing, learn from them early, and then hopefully get in a good flow and be able to make something of it at the end.”