Challenging round for DPH Husqvarna 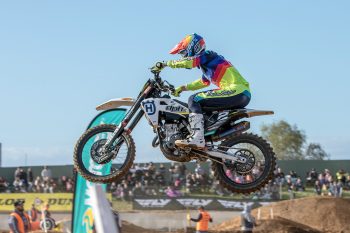 The second round of the Australian Supercross Championship, held at Gillman Speedway, in South Australia, saw the DPH Motorsport Husqvarna Factory racing team riders, Todd Waters (FC450) and Wilson Todd (FC250) racing what looks to be the largest supercross track of the season. A crash forced Waters to race back up to eighth, leaving the Gold Coast based rider sixth in the SX1 championship. For Wilson Todd in SX2, the day started strong, and after running at the front in the final, a crash saw the reigning motocross champ carried off the track, in what is likely to be season ending injuries.

Boyd Hocking, DPH Husqvarna Team Manager: “I always enjoy heading to Adelaide for supercross as Gillman Speedway provides plenty of room to build an amazing track and that’s exactly what Troy Bayliss Events and Protraxx served up for us. Unfortunately, it was another tough weekend, I’m devastated for Wilson, after coming third in his heat, and running second in the Final until a small mistake in the rhythm section and crashed very heavily, sustaining injuries to his pelvis and fracturing bones in his back. Luckily, I can confirm that doctors have had Wilson up and walking, but at this stage, I wouldn’t expect to see him back before the end of the season. I’m happy with Todd’s progress after zero preparation leading into these first two rounds. 8th on paper isn’t that great, but considering he actually went down in the whoops, and rode through the field to salvage that position. With three weeks until Wollongong, Todd will come down to Melbourne to get in the testing he missed prior to the start of the season, which will be vital to a strong finish to the series.”

Todd Waters, SX1 – FC450: “Saturday night was super fun. My night was not the best result due to a crash first lap through the whoops. My riding is getting slowly better as I’m getting more bike time. I was able to come from 20th to 8th where I fought up to the group of 5th, 6th and 7th. Thanks to DPH fir the support throughout my injury and being patient with my riding. Looking forward to the coming three weeks of training as I’m heading down to Melbourne to test and get the bike to where I like it and my riding.”