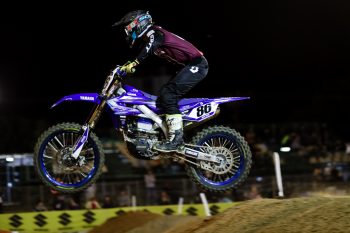 Premier class rookie Richie Evans experienced a breakout night in South Australia for round two of the Australian Supercross Championship, earning a career-best result of fifth in the main event.

The Yamalube Yamaha Racing rider, who’s still recovering from a shoulder injury sustained in the lead-up to the series, rode strongly all night on the challenging Port Adelaide circuit, qualifying sixth, finishing second in his heat and charging to fifth in the 20-lap main.

“I’m pretty happy with that,” Evans stated. “I know I’m not at the speed of the guys in front of me, but I wanted to get good track position early and then continue to do everything, every lap, and I was able to do that for the majority of the 20 laps.

“I could see Metty coming in the final but I didn’t want to do anything crazy, so I just kept my flow going and focused on what I was doing. If he got me, he got me! But, all up I’m really happy with fifth and now I’m fifth in the championship.”

Wollongong will host round three of the Australian Supercross Championship on 9 November in New South Wales.