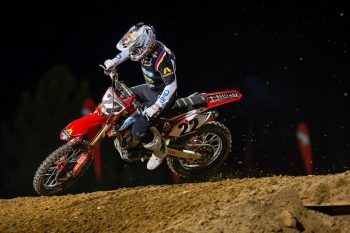 Chad Reed says he’s encouraged by his showing at the weekend’s Monster Energy Cup in Las Vegas, which saw him take on the event despite minimal bike time aboard a privateer Honda.

The two-time AMA Supercross champion, whose plans for 2020 are still uncertain, recorded a consistent 8-10-12 scorecard for ninth overall in the triple crown format.

“You obviously acknowledge and know that it’s going to be a tough weekend,” Reed stated in an interview with RacerX. “I think I finished 10th overall. The potential that I feel is there – that’s what you always want.

“Generally, though on paper it looks like we’re far off, I feel like with some time we can get there. I’m encouraged by the weekend. We had no issues – everything went smooth.”

Reed also indicated the CRF450R he used in Las Vegas will likely be shipped to New Zealand for the Monster Energy S-X Open Auckland next month, following by his annual homecoming at the AUS-X Open Melbourne.