The triple crown format saw three different race winners across the night, with the $100,000 winning-prize coming down to the final moments of main event three.

Main event two saw Stewart secure an incredible win in his first racing since breaking his femur earlier this year, he defeated Cianciarulo and Tomac, who recovered from an early fall.

Friese was fourth, followed by MXGP World Champion Tim Gajser (Honda HRC) in an impressive fourth. Reed was 12th in the encounter.

It was a winner takes all affair in the main event three, and the race ultimately came down to Cianciarulo and Tomac. The pair tussled for the entirety of the outing, with Tomac taking the joker lane on the penultimate lap, while Cianciarulo emerged with the lead after taking it on the final time around.

The rookie captured victory with Tomac a mere 0.867s behind, as Stewart crossed the line in third, followed by Gajser and Friese. Overall, it was Cianciarulo from Tomac and Stewart. 10th in the final main granted Reed ninth overall.

In the 250 Futures race, Australian Jett Lawrence (Amsoil Factory Connection Honda) was victorious after capturing wins in both outings, while fellow Australian Myles Gilmore (Husqvarna) was third in the Supermini Futures class. 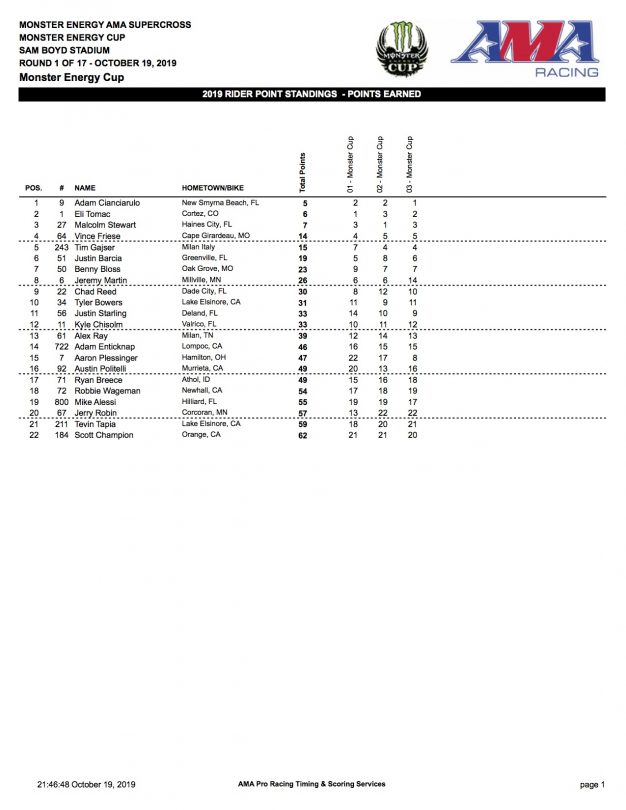