Title hopes in doubt for Hayes after round two concussion 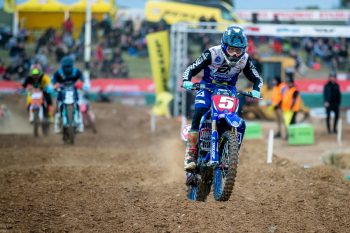 Former SX2 points leader Jacob Hayes has had his title hopes thrown into doubt after a concussion in the opening laps of Port Adelaide’s main event saw him forced to prematurely exit round two of the 2019 Australian Supercross Championship.

The Serco Yamaha contender was tipped as the favourite to win in South Australia, as the then red-plate holder boasted exceptional speed throughout every session, including topping Superpole.

The American import suffered a poor start and was forced to make a number of quick passes in the main, however while attempting to cut under Aaron Tanti (Serco Yamaha) and Jay Wilson (Yamalube Yamaha Racing), he came up short as he tripled into the third rhythm lane, causing him to crash heavily.

“Aaron [Tanti] made a move on Jay Wilson, and Jacob squared the corner off and thought he could still make the triple in,” team owner Gavin Eales explained to MotoOnline.com.au. “He didn’t make it- he didn’t get the front wheel across and knocked himself out, but he’s all good. He’s very sore, but he’s fine.”

Hayes now sits seventh in the championship standings, 17 points behind newly-appointed leader Tanti as just three rounds remain. The next stop on the calendar is scheduled for 9 November at Wollongong in New South Wales.