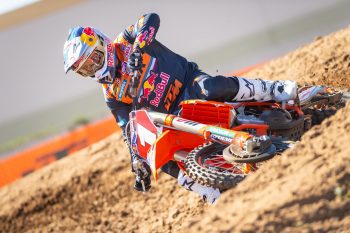 The Red Bull KTM Factory Racing rider released a statement confirming his withdrawal, explaining a lack of seat time since returning from a knee injury sustained in the Lucas Oil Pro AMA Motocross Championship is the reason he’ll sit on the sidelines this Saturday night.

“I will not be racing MEC this weekend,” Webb commented. “With only three days of riding on the 450 so far, KTM and I decided it would be best to skip this race and focus on preparation and testing for 2020 SX.”

Webb, who raced Red Bull Straight Rhythm on a two-stroke earlier this month, is the second high-profile rider to withdraw from the Monster Energy Cup after 2018 supercross champion Jason Anderson (Rockstar Energy Husqvarna Racing) elected to miss the event.

Webb’s teammate Marvin Musquin also confirmed he won’t on the start line, however he wasn’t initially slated to contest the one-off race.