Motocross champion confident of lining up at Port Adelaide. 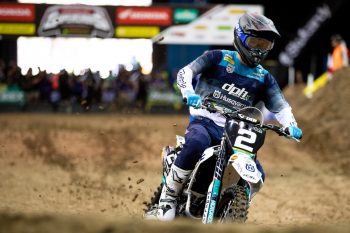 Dual MX2 champion Wilson Todd has revealed he re-cracked a rib ahead of the night show at Brisbane’s opening round of the 2019 Australian Supercross Championship.

It’s understood Todd initially injured his rib and shoulder in the weeks leading up to Brisbane, however a crash during practice on Saturday saw the DPH Motorsport Husqvarna rider re-injure himself before having to transfer to the main event via the B main.

Todd, who confirmed to MotoOnline.com.au in August that he’s already signed a deal in the MX2 World Championship for 2020, pieced together a 6-8 scorecard for seventh in the SX2 category.

“Even though I was still sore, I was confident I could race against these guys and do well, and I still feel that way,” Todd explained. “The results on paper don’t look that strong, but I dropped the bike in practice and re-cracked my rib and I raced through the pain.

“With only a few days until we head to Adelaide for round two, it’s not ideal. But if anything, I’m even more confident that I have what it takes, and I’ll be doing everything I can to be ready for next Saturday.”

The Australian Supercross Championship heads to Port Adelaide this weekend for round two, where a traditional format will take place on a full-size circuit.