Serco Yamaha ace on the box for the first time since May. 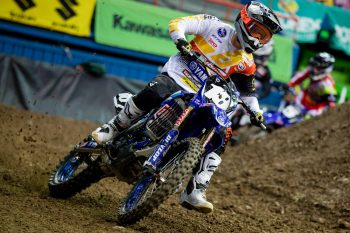 Serco Yamaha’s Aaron Tanti saw his podium drought come to an end at the first round of the Australian Supercross Championship in Brisbane, the New South Welshman appearing on the rostrum for the first time since Murray Bridge’s fifth round of the Pirelli MX Nationals in May.

Tanti consistently fell shy of the podium throughout the second half of the MX Nationals, leaving the title contender extremely frustrated with a string of fourth place results.

Earning second on Saturday night with a 2-3 scorecard, Tanti expressed relief to land on the box in the very first round of supercross.

“It feels good to get back up on the podium again,” said Tanti. “In the MX Nationals I finished fourth more times than I can remember. so it was good to reset for supercross and then come out strong at the opening round and get on the box.

“My day was pretty smooth all round as I was able to qualify in third, was in the top three for my heat race and then finished 2-3 in the main events, so it was a really consistent night for me and my starts allowed me to be up the front every time.

“Anything can happen on a tight track like this but I’m happy to finish second tonight and look forward to getting on the bigger circuits in the coming rounds.”

Port Adelaide will host round two of the Australian Supercross Championship this weekend on a traditional sized circuit.