CDR Yamaha Monster Energy rider lands on the podium at the season-opener. 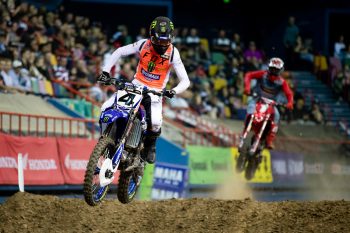 Luke Clout says the ‘real racing can begin’ now that Brisbane’s indoor has been completed, the CDR Yamaha Monster Energy rider opening up his 2019 Australian Supercross Championship campaign with a podium result.

The tight confines of Brisbane Entertainment Centre, which saw just 10 start gates available for the double-header main event format, offered up aggressive and close racing, placing a stronger emphasis on starts to escape the carnage and earn a respectable result.

Clout, a heat race winner, was able to piece together a 4-3 scorecard for third on the night, however as the series heads into four consecutive full-size supercross circuits, the title contender is confident of unleashing his full capabilities.

“You go into the opening round of the championship looking for a positive and safe start, and that’s exactly what we did,” Clout explained. “We are in the hunt and things are looking good, but I also believe I can be better and now we are out of the tight nature of indoors, the real racing can begin.

“Racing indoors can throw up lots of things but we were able to handle them and now we have full-sized tracks at the remaining four rounds where we have time and space to make the racing better, and I can’t wait to get to Adelaide this weekend.”

A one-week turnaround will see the Australian Supercross Championship back in action this Saturday night at Port Adelaide in South Australia.