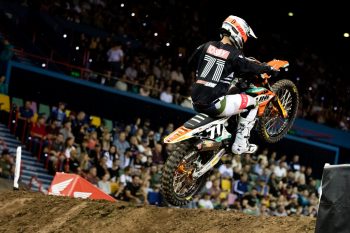 American Josh Osby has expressed frustration in falling shy of the SX2 podium at Brisbane’s first round of the 2019 Australian Supercross Championship after securing victory in the opening main event of the double-header format.

The Raceline KTM Thor rider stormed to P1 in the first 10-lap encounter, however the tight confines of Brisbane Entertainment Centre caught out the number 71 in main event two, as he struggled to move forward in the field, settling for fifth.

His 1-5 scorecard, combined with an Olympic scoring system, saw the title contender granted fourth for the round. While disappointed, the race win has injected confidence into Osby in the just the early stages of the five-round series.

“Obviously I’m a little frustrated after winning final one and then not being able to match that in the second final,” Osby commented. “But I’m happy with where the team and I are at after round one and I proved to everyone including myself that I have the speed to win. We have solid points and a great base for the season ahead.”

In a quick turnaround, the Australian Supercross Championship heads to Gillman in South Australia this weekend for round two.