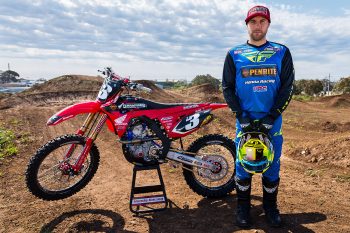 Terrafirma Equipment Sales (TES) will feature as the title sponsor of American Chris Blose at Penrite Honda Racing through Saturday night’s opening round of the 2019 Australian Supercross Championship.

The Yarrive Konsky-operated team has uncovered a special one-off livery that Blose’s factory-supported CRF250R will wear at Brisbane Entertainment Centre, with TES committing as a major backer of the official Honda program.

“I have known Yarrive for a long time and have wanted to align with the team for several years,” explained TES managing director, Darren Assink. “The opportunity to join the factory Honda team this year was presented to me and I felt it was the perfect fit for Terrafirma Equipment Sales. I also aligned with the Supercars team that Yarrive is associated with and achieved immediate success – people who buy our machines enjoy all forms of motor-racing.”

TES is a Brisbane-based company, with Assink a fan of racing having partaken himself back in the eighties. He is pleased to see the supercross championship return to the Brisbane Entertainment Centre.

“The supercross promoters are doing a great job in taking supercross to the masses,” he continued. “The Brisbane Entertainment Centre offers patrons great seating, a warm arena and the perfect atmosphere to experience supercross. Four of the five rounds are going to be on TV and we are proud to be associated with it and the Penrite Honda Racing team.”

Konsky commented: “This is fantastic. Darren’s company sells machines that we all use to build tracks, work on farms and rural land, as well as in small and large construction businesses. The alignment fits and we will work hard to ensure it’s a tangible relationship.”