Industry experts list their tips for the 2019 Australian Supercross Championship.

On the cusp of another Australian Supercross Championship, anticipation is building among the industry, teams, racers and fans. With a host of American riders again bolstering the ranks of the 2019 series, the stakes are at an all-time high for the Australians. With so many factors at play, MotoOnline.com.au hit up some of the leading industry experts for their SX1 and SX2 championship picks.

I think the opening round at Brisbane this weekend is going to play a big role in how the series plays out and those with experience in arenacross and those sorts of tight tracks will get off to a great start. In SX1, I think Brayton is still the man to beat, but having seen both Luke Clout and Dan Reardon practicing, I think they’ll both be strong. Brett Metcalfe will also be solid and later in the season I think Josh Hill is going to throw a cat among the pigeons with his speed. In SX2, Chris Blose will be super aggressive and strong, but the placings from second to sixth are going to be really tight between Oldenburg, Wilson, Dylan Wills, Brad Taft and Jacob Hayes. Any of those guys could podium and win races, so a good championship result will come down to who’s the most consistent.

In SX1 you’ve got to pick Justin Brayton for obvious reasons and his track record here in Australia is pretty amazing. I’m tipping two outsiders to round out the podium. Jackson Richardson is riding really well and the 450 suits his style a lot more than a 250 – at Split Rhythm a couple of years back he almost beat Reardon on a stock 450. In third I’ll go with Dylan Long, who’s matured nicely, he’s a great supercross racer and it’s time he came through with the goods. As a footnote, I think Josh Hill will be top three at the rounds he rides. In SX2, Jay Wilson is always consistent, proven and doesn’t take crazy chances. I think he should defend his title, with Blose behind him. Blose has ridden in Australia before, so he should adapt better than the other Americans, especially to the tighter indoor tracks. I think Oldenburg could round out the podium. He’s so fast, but potentially isn’t as consistent as Wilson and Blose.

It’s a struggle to separate the top three in each class, but in SX1 I don’t think you can go past Justin Brayton. He’s won the title three years in a row and with factory Honda backing and parts, so I think it’s his to lose. Behind him, I think Clouty will be good, and after his great result last year, I expect Metty to be up there as well, in at least third place. SX2 is going to be intense with five or six Americans coming over, and you just don’t know if they’ll perform or not. I think Jay has what it takes to take the title again this year and Wilson Todd is always amazingly fast. I’m tipping him for second and for third I’ll pick Jacob Hayes, simply because he’s number on a Yamaha… he better do me proud!

What makes it hard for the SX1 field is having the likes of Joey Savatgy, Jason Anderson and Dean Wilson coming over and throwing the series points out. Obviously Justin Brayton is the only one who can be competitive against those guys and he should win another championship as a result. In second, I think Luke Clout is moving from thinking he can win to believing he can win and that will show in his speed and race-craft. I like Jackson Richardson for third. He’s definitely coming in underrated, but is it that crazy to think a two-time SX2 champion could place third in SX1? In SX2, I’m picking Jay Wilson to go back-to-back. He’s had a really good off-season and has plenty of motivation with his upcoming supercross season in the US. I believe Wilson Todd is Australia’s most talented rider at the moment in terms of raw speed – he’ll win races and even if he’s not quite as consistent, if you’re winning races you’re always in the points. In third Mitch Oldenburg has plenty of motivation to do well and has loads of speed and talent, so I think he’ll be the best of the non-Australians. 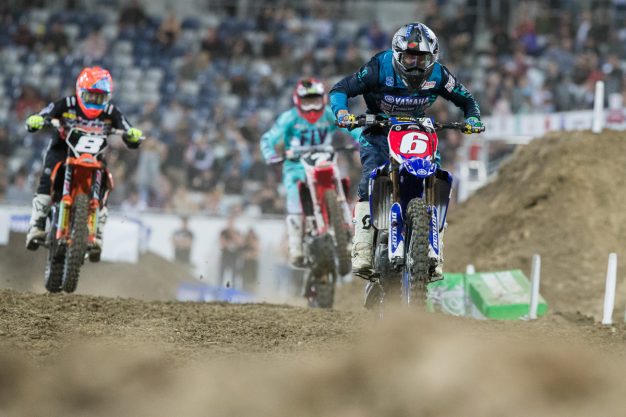 We seem to say it every year, but this year’s supercross is looking exceptionally tough to pick. One thing is for certain, the SX1 and SX2 champions will have certainly earned their title come Melbourne. In SX1, I think Brayton should be able to continue his winning streak, simply because he now has a wealth of experience competing in Australia and has truckloads of confidence. However, I think Reardon will push him. I like where he’s currently placed mentally, and he’s solely focused on supercross now. In third I think the experience of Brett Metcalfe will beat the raw speed of Luke Clout, but it’ll be tight. SX2 is a complete unknown and you might as well pick names out of a hat. Mitchell Oldenburg has incredible pace, but isn’t known for consistency, while Wilson has that ability to place on the podium every race. I think that’ll give Wilson the upper edge in a short series where all points count. Chris Blose will be super-strong with his arenacross background and should finish third.

With Brayton’s record, he just in a class of his own really, especially what he’s been doing in the past few years. Coming off last year as a privateer and getting third in the championship, I think Reardon, with the extra support of CDR Yamaha Monster Energy, I reckon he’ll battle with Brayton for the title. A lot of stress will be off him, and he’ll be able to concentrate on racing. Metcalfe has just been there and done it so many times before at all levels, so he knows what it takes. In the SX2 class, the Yanks on paper are pretty quick, but mistakes can happen pretty quickly. I think Blose with his arenacross and supercross history, plus he’s been to Australia before, he knows how it all works and how important the start it. Wilson’s starts were unreal last year, and with his mindest on going to America, he’s going to want to put on a good performance. It will be tight between those two and it could go either way. If Tanti gets his starts sorted, I think he’ll be top five consistently – I think he can do it if he gets good starts.

You just can’t go past Brayton in SX1 as he aims for a fourth-straight championship with Penrite Honda, but chances are he will come under increased pressure during the season. Clout will be the best he’s ever been and Metcalfe was a real standout last year, so they’re my top three predictions at this point. I’m really interested to see what the likes of Reardon and Jackson Richardson can do though, because no doubt they will be competitive, plus – once he’s 100 per cent healthy – Todd Waters is capable in supercross as well. As for SX2, Jay Wilson was so strong last year, so I am tipping him to defend ahead of the Americans, Hayes and Oldenburg. In saying that, expect Blose to be amongst it from the outset, plus Todd and Kyle Webster have the speed as well, so any of them could prove me wrong.

As everyone has mentioned, Brayton is the clear favourite to secure his fourth-straight title. Despite being 35 years of age, he’s in the peak of his career, and his form is far beyond when he first wrapped up the championship in 2016. In saying that, the competition is going to be tough, and I think Reardon, equipped with a CDR Yamaha Monster Energy YZ450F, will be right in the mix for the crown. You can never discount Metty either, as he’s proven time and time again. The SX2 category is stacked this year, especially with an influx of internationals. I’m backing in Wilson to get the job done and claim consecutive titles – he’s in a much better position this year and really came on strong in the MX Nationals towards the end of the series. Blose will be aggressively competitive as ever, and will no doubt take it to Wilson in the title fight, while Hayes, who done extremely well last year, will be right there with them.