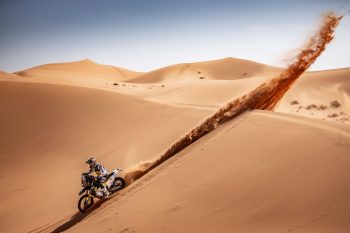 Leading the overall standings going into the final day of racing, Short knew he would still have to attack the 168-kilometre timed special to defend his position from the riders behind.

A crash early on in the stage couldn’t slow the American’s progress and despite the added pressure of being one of the first riders on track, he put another excellent ride to complete the stage in fifth, edging out teammate Pablo Quintanilla and Joan Barreda (Monster Energy Honda).

“I can’t believe it – it doesn’t seem real right now,” said Short. “My main goal coming to Morocco was to finish second in the championship, but to take the win feels unreal. I was second at the Silk Way, which was huge for me but there were a few of the top riders missing.

“Now all the guys are here at this event getting ready for Dakar and to take the win with such stiff competition is amazing. I couldn’t have done it without the support of the team and the opportunity they have given me over the last couple of years.”