Rockstar Energy named as major backer of the popular Queenslander. 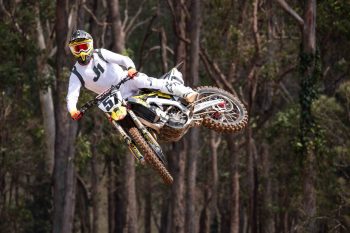 Two-time SX2 champion Jackson Richardson has outlined his privateer program for the upcoming Australian Supercross Championship in the premier class, attracting a number of high-profile partners for the series.

The likeable Queenslander indicated he’ll step up to the SX1 category in August, however at the time, he was still finalising sponsorship for the five-round championship.

Richardson has since unveiled his partners, revealing major backing from Rockstar Energy – which marks the energy drink giant’s return to Australian supercross – plus support from a list of companies that includes Just1 Racing, Fist Handwear and Honda Motorcycles Australia.

“I’m really excited for the Australian Supercross Championship,” Richardson commented. “I genuinely think this is the biggest championship we have had in almost a decade with competitors travelling from all over the world.

“This year I’ve been very fortunate to work with some of my closest friends and family, I am grateful for all my sponsors, team and supporters that have come on board this supercross series, it has been a huge effort and is very much appreciated.

“My pre-season training has been really solid and most importantly really fun, I chose to sit out the MX Nationals which really gave me time to focus on our Australian Supercross Championship.

“I spent months in the United States testing with XPR and getting as much seat time as possible but I’m over the moon to be back home here in Australia and I can’t wait to rip the lid off it.”