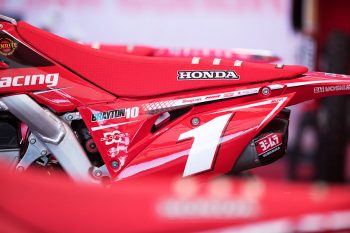 It’s understood that the Victorian-based operation will take an Australian rider over to the US in a bid to build supercross experience on the big stage, however, the details remain scarce beyond those plans.

Honda Australia’s factory team will introduce a yet-to-be-announced second full-time 450 rider for next season alongside Brett Metcalfe, with rumours also suggesting the team will field a factory 250 outdoors. One of the team’s new signings – not longtime AMA regular Metcalfe – will spearhead its US supercross entry.

Penrite Honda Racing plans to enter the high-profile American series don’t end there, as Konsky has also revealed that he is assessing the possibility of building an American-based program that would be focused full-time on the West Coast 250SX series from 2020 or 2021 – likely with US riders to begin with.

“It’s in the extremely early stages of development, but we have committed to do at least the first three to four rounds of next year with an Australian rider for 2020 prior to the commencement of the MX Nationals,” Konsky told MotoOnline.com.au. “We are also investigating the possibility of doing the full season, either next year or in 2021.”

Meanwhile, the future of the CRF Honda Racing team operated by Mark Luksich has been cast into doubt beyond 2019 in recent weeks if the rumour-mill proves correct, despite achieving second in the MX2 championship with Kyle Webster this year and being established as one of the primary 250 efforts in the country.