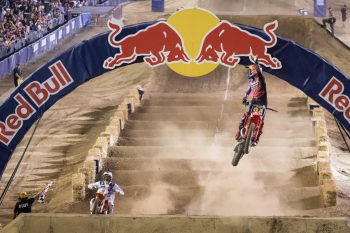 Racing was broken up into three classes by engine size – 250cc and 125cc – and operated on a single-elimination bracket, with racing a best-of-three format.

It was Roczen who was perfect throughout the night aboard his Honda CR250, never losing a matchup to take the 250cc title over Brandon Hartranft (Red Bull TLD KTM) and Josh Hansen (Honda).

In the 125cc class, Crown lived up to his name, racing his way to the top step of the podium ahead of Michael Leib (Honda), And in the highly-anticipated match of the night, Bowers edged out Pastrana in the 500cc Showdown.