AJMX titles decided on final day of racing at Gillman

Championships come down to the wire on the final day of racing. 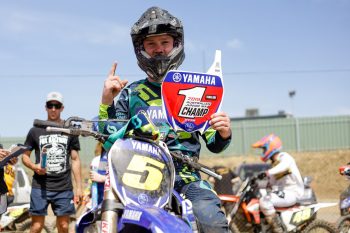 Champions were crowned on the sixth and final day of racing at the 2019 KTM Australian Junior Motocross Championship in Gillman, South Australia.

Continuing his run of perfect results, Alex Larwood earned the Junior Lites 15 Years crown after capturing his sixth straight final win over Blake Fox and Cameron Torpy, while in the 125cc 15 Years category, Fox emerged with the title as Levi Rogers won the final moto over Larwood and the newly-crowned champion.

Brad West rode dominantly to the Junior Lites 13-U15 Years championship with a commanding win in final six, where he comfortably defeated Deegan Mancinelli and Jackson Camilleri. The 125cc 13-U15 Years title came down to the wire, eventually won by Liam Atkinson. Ryan Alexanderson won final three over Atkinson and Hunter Collins.

The Mini Lites BW 12-U14 Years division was a thriller, where Ryder Kingsford was awarded the title on countback after equalling on points with Connor Towill. The third final was one by Byron Dennis ahead of Braden Plath and Cody Kilpatrick.

In another exciting tussle, Kayden Minear pushed through to the lift the Mini Lites SW 9-U12 crown, the Western Australian making last lap pass for the championship. The final outing was taken out by Hixson McCinnes over Jet Alsop and Minear.

Minear earned his second title of the week in the 65cc 10-U12 Years class while also winning the finale, and in the 65cc 7-U10 Years class, Cooper Ford emerged with the title as Cooper Downing won the final outing. Mason Brown secured the 50cc Division 2 7-U9 Years title after winning all six of his finals.