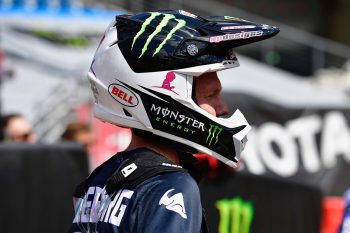 American Mitchell Oldenburg has signed with Penrite Honda Racing in the SX2 category for the entire 2019 Australian Supercross Championship, which will take-off in Brisbane, Queensland, on 12 October.

Oldenburg is the latest international to join the series, set to join defending SX1 champion Justin Brayton and Chris Blose – both Americans – alongside South Australian Brett Metcalfe in the Melbourne-based factory Honda team.

“The Australian Supercross Championship is legit,” Oldenburg commented. “I’ve enjoyed watching it online and have wanted to compete in it for a while. The tracks, the crowds, teams and riders are world-class and I am excited to get the opportunity to be a part of it this year.”

Penrite Honda Racing director Yarrive Konsky welcomed Oldenburg to the organisation for the five-round series, before going on to explain the purpose of signing riders from overseas – a strategy that has been immensely successful for the team in supercross locally.

“Mitchell reached out for a few months and we were undecided as to whether or not we would run two SX2 riders, so he came knocking at the right time,” commented Konsky. “He is eager to achieve great results and I believe both of our SX2 riders will be very strong contenders.

“Our primary objective is to put Honda bikes on the top step of the podium, so we look everywhere for the talent that can deliver those results. We have international riders, yes, but as well as our Ride Red program, which supports 10 Australian privateer riders.

“This year every manufacturer has signed international riders, which is exciting as it’s also about expanding our sport. Supercross is a globally-recognised competition with no geographical boundaries – we are putting Australian racing on the world-stage, which gives local guys more exposure and opportunities to race outside of Australia too.”