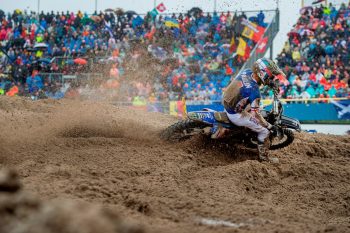 Monster Energy Wilvo Yamaha’s Gautier Paulin is pleased with Team France’s efforts at the weekend’s 2019 Monster Energy FIM Motocross of Nations (MXoN) in Assen, the squad seeing it’s five-year winning streak come to an end as the Netherlands earned the crown for the first time ever on home soil.

In rain-soaked conditions, Paulin came from outside the top 10 in the opening MXGP/MX2 encounter to finish fifth, while his second outing in the final race of the day saw his YZ450F run out fuel on the final lap, denying France of a podium result.

“We have won five times in a row, this was a big highlight of the Motocross of Nations for Team France, but all good things come to an end and today we have to accept the fail,” Paulin explained. “For myself, I was very happy with my teammates, we put in a good amount of effort to be on the podium and on the second to last lap, I run out of fuel.

“It’s tough to accept, but I had a great experience this weekend. The track was gnarly, the atmosphere and fans were incredible. Thanks to the public, and congratulations to The Netherlands on the win. It was a wet and gnarly weekend, but as always, it was a weekend we all enjoyed and it will give us a lot of memories.”

Paulin is set to remain with Monster Energy Wilvo Yamaha in the 2020 MXGP World Championship, which will become the official factory Yamaha team.