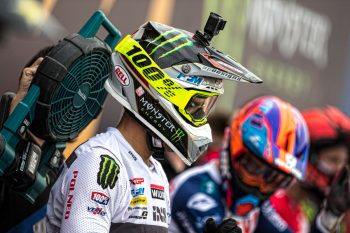 Monster Energy Wilvo Yamaha’s Gautier Paulin is confident he’s as prepared as possible to assist Team France to a sixth-straight Monster Energy FIM Motocross of Nations crown this Sunday in the Netherlands.

The Frenchman, who will represent his country for the 11th time in his career, says he’ll be racing for the team this weekend as he dons the number one plate.

The French team has endured a tumultuous lead-up to the MXoN, first with Romain Febvre (Monster Energy Yamaha Factory Racing) bowing out with injury before the federation excluded Red Bull KTM Factory Racing’s Tom Vialle over a logo dispute.

“We haven’t stopped since it’s the end of the World Championship season, we have kept pushing to be good in Assen in such tough sand conditions. This weekend is a unique event, we don’t just ride for ourselves, we ride for the team. We will do our best to be up front.”

Paulin will be joined by Maxime Renaux (Yamaha) and Jordi tixier (KTM) in the three-rider squad this weekend.