Vlaanderen sensing pressure of being MXoN favourite with Team Holland

Dutch squad tipped as the favourite at home event in Assen. 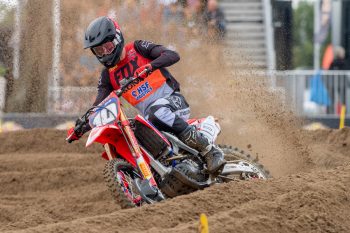 Calvin Vlaanderen is sensing the pressure of Team Holland being tipped as the favourite for this weekend’s Monster Energy FIM Motocross of Nations (MXoN), which will be staged at Assen in the Netherlands.

The Honda HRC rider, who will be joined by powerhouse contenders Jeffrey Herlings (Red Bull KTM Factory Racing) and Glenn Coldenhoff (Standing Construct KTM), is confident he can withstand the mounting pressure of winning in front of a home crowd.

Finishing this year’s MX2 World Championship with a ranking of eighth after missing a number of rounds due to injury, Vlaanderen was ultimately chosen for the MX2 spot on the Dutch team over Roan Van De Moosdijk (F&H Kawasaki) as the federation initially named the two riders as possibilities.

“I am extremely excited for this years’ Motocross of Nations,” Vlaanderen stated. “It is a massive honour to get picked for the Netherlands at this race, and even bigger because the event is in Assen, where there will be huge home support.

“With myself, Jeffrey and Glenn we have a really good chance at winning the event but we know that comes with big pressure, so now that is probably the biggest thing. However I think I have shown this year that I can cope with that, and that I am a good sand rider and that I can keep pushing until the very end, and that will be my main target.

“It won’t be easy racing against 450s but I am confident with my Honda CRF250RW and I think we’ll have a good setup for this race. Also a big thanks to all the fans who have shown their support after it was announced I was in the team, it makes me extremely proud to have you cheering me on.”

In 2018, Team Holland was primed for victory following dominant performances by Herlings and Coldenhoff, however an eye injury denied Vlaanderen of finishing race one and ruled him out of race two. Still, the squad finished second in the classification.